Nulungu Insights provides an avenue for Aboriginal people and collaborators working in the Kimberley region of Western Australia with an opportunity to publicly inform, discuss and present their activities and research. Contributions may be authored by Aboriginal communities, as well as local and visiting researchers. It is a non-peer reviewed publication, but articles are subject to editorial oversight. Papers are aimed at audiences within the community, organisations or government networks. 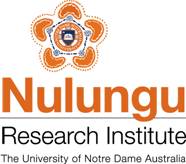